There are no cars in Port-Cros…not even a bike to disturb the insular calm. Heart of the National Park created in 1963, the wildest and best preserved of the Golden Isles is made for hiking. Be Robinson Crusoe for a day and set upon the island’s marked trails, losing yourself among the arbutus and cistus trees, accompanied on your adventure by the cicadas’ song. Three trails running along the coast and inland will take you on a discovery hike amidst Port-Cros’ natural and cultural wonders.

To get to Port-Cros, ferries depart regularly from the Saint-Pierre Marina, Hyères' main marina. You can find the schedules, prices and all practical information in this page.

Accomodations in Port-Cros are concentrated in the little harbor. Hotels and holiday rentals will make your trip unforgettable !

Choose your restaurant on Port-Cros island and enjoy a tasty break under the mediterranean sun.

In the interest of everyone’s safety, access to the island’s forests may be temporarily closed to the public. In these circumstances, it is only allowed to transit (walking )  on the paths leading to the beaches.  These authorised paths are highlighted in red on the map below. When risk is extreme (Red + E), all […]

Itineraries and routes on Port Cros

Let’s hike! There are no cars in Port-Cros…not even a bike to disturb the insular calm. The wildest and best preserved of the Golden Isles is made for hiking. Be Robinson Crusoe for a day and set upon the island’s marked trails, losing yourself among the arbutus and cistus trees, accompanied on your adventure by the […]

Ideal for hiking, Port-Cros is an unspoiled island in the core of the National Park. To explore the island freely and enjoy its trails, we recommend you to bring good walking shoes and a bottle of water. NB: The paths of the island are not suitable for strollers.

Trailing through the past

Port-Cros owes its name to the hollow shape of its harbour. The island has known a stormy past and was, until the 20th century, the theatre of numerous invasions and conflicts. For centuries, Port-Cros was regularly ransacked by pirates mooring on its coasts. Under the reign of Francis the 1st, the island, along with the neighbouring Bagaud and Le Levant, were given the status of marquisates and granted asylum to numerous judicial convicts in the hope that their presence would deter invasion and protect the island from piracy. Unfortunately, the arrival of the convicts only worsened the level of crime and looting. The following centuries were spent trying to restore order on the island. Richelieu built numerous forts there and Louis XIV fought against robbery. Nonetheless, Port-Cros remained a zone of conflicts and was even invaded by the British in the 18th century until the French count of Maurepas chased them away. Finally, the island witnessed the liberation of Provence in 1944. It is now a peaceful and quiet retreat loved by tourists. Mass tourism, however, has represented a threat to the island and
Monsieur and Madame Henry, its former owners, bequeathed the island to the State as a measure to protect its precious ecosystem

If the islands’ natural beauty and authentic flora and fauna remain intact to this day, it is thanks to the tireless work carried out by the Port-Cros National Park. The Park, with the help of its partners, has been protecting these spectacular landscapes since 1963. The National Park consists of two cores: the island of Port-Cros and “theprotected natural spaces on the island of Porquerolles belonging to the State”. The waters, within a distance of 600 metres from the shores are also part of the National Park. You have an important part to play in preserving the natural beauty of these landscapes for future generations. Please respect the Park’s regulations. 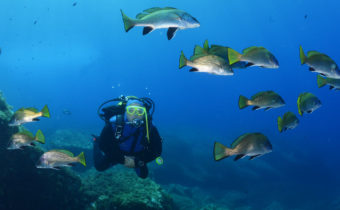 Come scuba dive in Hyères and enter the underwater world of silence. Our city is one of the most popular spots on the planet, as is the Mediterranean.

The blog of Port-Cros